I have to confess to you that I have never attended an ANZAC Day service.

I told someone this recently and they ‘excused’ me with the response, “That’s okay, I’ve never been to a church service”, thus tapping into the recent almost religious fervour ANZAC day has taken on. Never before have there been the numbers we are seeing at services all over Australia as well as at the memorial at Gallipoli. Why is this? I’ve read a couple of articles and listened to a few podcasts. There are theories, many, but I have one of my own I’d like to try out on you.

I’d like to suggest that somewhere inside the psyche of many Australians is a longing for something greater than what we have. Our foundational identity is rooted in our (white) history of prison transport…convicts. What once was shameful, a blight on a family’s history, now has been turned into a badge of honour. Or maybe it’s a relative who fought in some horrific blood-soaked battlefield who is now a family hero.

Many Aussies (particularly those with a long family history here) have a hope, a longing for connection, for something better. The increased fervour around ANZAC and Australia Day is another sign that something in our collective consciousness has been shifting over the past decade.

It’s like we are drifting loose and throwing our ‘hope rope’ around anchor points in our past to gain some significance.

ANZAC Day, once a commemorative, memorial service, has become, like Australia Day, a day of flag waving and ‘Aussie Aussie Aussie’ shouts. A day in which we seem to have an excuse, for good and mostly (?) for bad, to scream out “this is what I am! I am Aussie!!” (ANZAC Spirit, national pride etc). It raises for me a whole lot of questions, too complex to be dealt with here, about nationalism and patriotism, maybe even national shame regarding forced occupation, a kind of self-justification.

[warning – side-track about to happen] Deep down we know the first invaders and our early settlers’ behaviour was inexcusable, but we don’t quite know what to do with this feeling of living on stollen land, benefiting from the atrocities of the past. So instead of claiming it, owning it, and apologising for it. We shout all the louder. We assert our ownership just that bit stronger in the hope that our noise might just drown out the cries of the aboriginal lives we are standing upon and this whispering in our hearts* that says ;

“something is really not quite right here”.

We also live under the distant cloud of a White Australia Policy. Surely (hopefully) this also sits deep down inside even the most racist person as a non-sensical belief system/policy. People react to Peter Drew’s Art (see pic) street art posters all over Australia depicting people of differing nationalities with the word “Aussie” underneath. Peter’s work is intentionally provocative, hoping to jar people into confronting the fact that

our nation is not white and never was

despite the government’s best efforts to make it so. We are built of the backs of (first and foremost) the people who lived upon the land we now call Australia for over 60 000 years, followed by countless generations of Afghans, Chinese, Irish, German, English, Indonesian…the list is endless! In the words of the song, “I am, you are, we all are Australian”.  [end side-track] 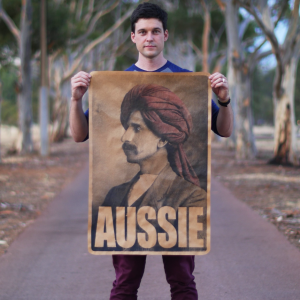 But it is what lies beneath that has me wondering. ANZAC…a day of hope. Hope that we can be unified? A longing for peace? Is it about mateship, a longing for real community, comradeship, is it deeper still?

I am leaving many of these questions undone. I am not sure I know how to answer to them. But I do have an idea around the source of where the answer may lie.

In the words of Christ (who lived under the regime of an oppressive empire, he witnessed nationalism, and the worship of the Emperor, maybe Trumps dream?) we find statements from him like, “I am the prince of peace”, “My empire/kingdom is not of this world, it looks NOTHING like THIS”. “I have come to give you life, but real, abundant life”. “I come to give you peace not this PAX ROMANA (Roman Peace) pretence, but a different kind of peace to what the world will offer you”.

It’s in some of these statements made by Jesus, that I believe our answer to identity and longing is to be found, not in religion (Jesus himself had little time for this), nor in Sunday Church services, but deep in the person of Jesus Christ, his teachings and his life.

Shortest and longest books of 2022.
Best nonfiction for 2022.
Best Poetry for 2022.
Best faith based book of 2022, Gushee’s ethics book almost took it out.
Best indigenous themed book for 2022, most creatively written in this space. Great twist that left me confused at first, a real ‘what the??’ type moment. I read quite a few books around this theme of first Australians both fiction and non fiction, I have another Kim Scott to read on my shelf.
Best fiction read for 2022, quite ‘out there’.
Loading Comments...