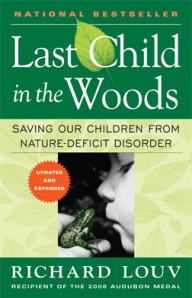 It not be significant to many, but I thought it worth a mention. I finished a book this morning by Richard Louv. The book was called Last Child in the Woods. The significant part is that Richard (a guy who lives in the USA) is in Perth just for this morning speaking at a conference! Anyway I did not get to hear him but I finished his book instead. It was a great read for all people interested in the benefits of growing up with the outdoors in your blood. Good for teachers and parents and lovers of wild things and spirituality! Here’s what Louv’s website says of the book ;

n this influential work about the staggering divide between children and the outdoors, child advocacy expert Richard Louv directly links the lack of nature in the lives of today’s wired generation—he calls it nature-deficit—to some of the most disturbing childhood trends, such as the rises in obesity, attention disorders, and depression.

Last Child in the Woods is the first book to bring together a new and growing body of research indicating that direct exposure to nature is essential for healthy childhood development and for the physical and emotional health of children and adults. More than just raising an alarm, Louv offers practical solutions and simple ways to heal the broken bond—and many are right in our own backyard.

Very revealing. What a disturbing story.
Partaaaay
Thunderbirds are GO!!!
Christine’s sacrificial birthday lamb! (Sorry vegetarian friends 😳)
I do a lot of audio (library and Audible) these days as I do 2-3 hours in the car to and from work. But every now and then it’s nice to get a package in the mail!!
Down at Dwellingup today. A group went to check on water levels down at #bobscrossing and #badenpowellwaterspout Oh wow! This is normally a tranquil pool above a slow flowing (if at all) #murrayriverwa But today is is over the banks and flowing fast!
%d bloggers like this: