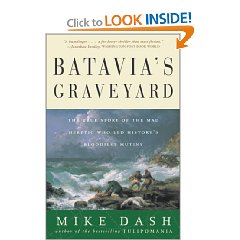 I picked up an Australian history book on The Book Depository – THE best place to buy cheap books the other week and it arrived a few days ago. The thing that has got me deeply hooked into this great read is that when I grew up I attended WembleyDowns Church of Christ. I grew up with a family that still attends that Church, a family in which the dad was always going off diving with the University and working with the WA Maritime museum. It was not until I was in high school doing history that my parents told me that the particular history I was studying (The Batavia) was what this guy John had been working on for some years. He was diving collecting and restoring the old ship, which can be seen with some of its treasure at the WA Maritime museum in Fremantle.

Here is the Amazon review –

In 1629, the Dutch merchantman Batavia grounded on a desolate atoll near Western Australia. Of the 200 survivors, 115 were subsequently murdered, in coldest blood, by a group of the ship’s sailors and their psychopathic leader, Jeronimus Corneliszoon. Batavia’s Graveyard is Mike Dash’s unnerving, measured account of the incident. The victims included children, babies, and pregnant women; the crimes took place over a period of several months. Though the killings make a substantial, chilling tale in themselves, Dash adroitly places the shocking spree in larger context with illuminating discussions of 17th century medical practices, religious heresy, global politics, and shipboard sociology and daily life. Additionally, he draws dozens of portraits of the participants in this ghastly drama, most fascinatingly that of Corneliszoon, who emerges as a grotesquely charismatic predecessor of the likes of Charles Manson and Ted Bundy. Batavia’s Graveyard, a skillful melding of accessible scholarship and evenhanded narrative and of overview and telling detail, is a welcome achievement.

There was an error retrieving images from Instagram. An attempt will be remade in a few minutes.